I was lucky enough to win the first round of the F1 Connectivity Innovation Prize with my innovative solution to make the F1 timing data accessible to all. Below is the challenge that Tata Communications set, and my winning entry.

Formula One Management’s timing information screens introduced in the early 80s were initially exclusively available at trackside and fed to officials and team personnel via a radio frequency distribution system. With the advent of newer technologies, the distribution of the timing information has become far more extensive being available in data form to the F1 teams and broadcasters, and more recently, via Formula1.com and the Official F1 App.

The Formula One Management Data Screen Challenge is to propose what new and insightful information can be derived from the sample data set provided and, as a second element to the challenge, show how this insight can be delivered visually to add suspense and excitement to the audience experience.

My response to the challenge

In the UK alone there are almost 2 million people living with site loss. That’s approximately one person in every 30. This number is likely to double by the year 2050. Almost half of blind and partially sighted people feel ‘moderately’ or ‘completely’ cut off from people and things around them.*

F1 is a global sport with a massive global audience, based on the UK figures above it’s safe to assume that there is a significant number of blind and partially sighted people who either have limited access to the sport or feel cut off completely. This shouldn’t be acceptable for F1, therefore creating a fully accessible data format should be an essential step to including everyone in the enjoyment of the sport.

Hamilton is catching Rosberg, he’s now within the DRS zone.

Rosberg has slowed on track in sector 1

Hamilton has taken the lead from Rosberg in sector 1

Rather than create a new visual format for delivering F1 data, this proposal aims to create a new open-source data humanisation service that can be delivered through various channels (including third party developers and services). It also aims to demonstrate these uses to highlight the core benefits of the solution.

The service takes an XML feed from the F1 timing data and compares it to previously saved data to generate humanised stories that bring the race or session data to life for the fans. The service then ranks stories based on importance and delivers it’s own feed via a RESTful API which can be used by other F1 services or third party apps in multiple languages and formats.

Examples of stories generated could include: 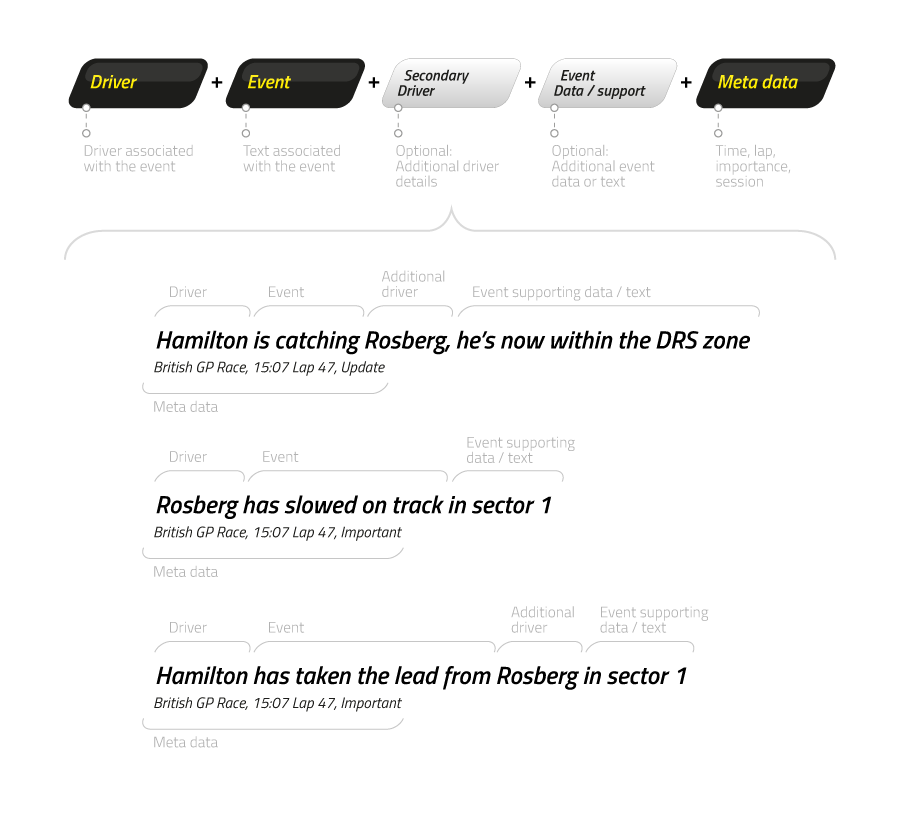 How does it work?

The service works quite simply, by collecting the F1 timing data every 20 seconds during a session, saving it to a database and then comparing it to previously saved data sets. It then:

The RESTful API then allows other services (including third parties) to retrieve the stories and publish them in various formats. 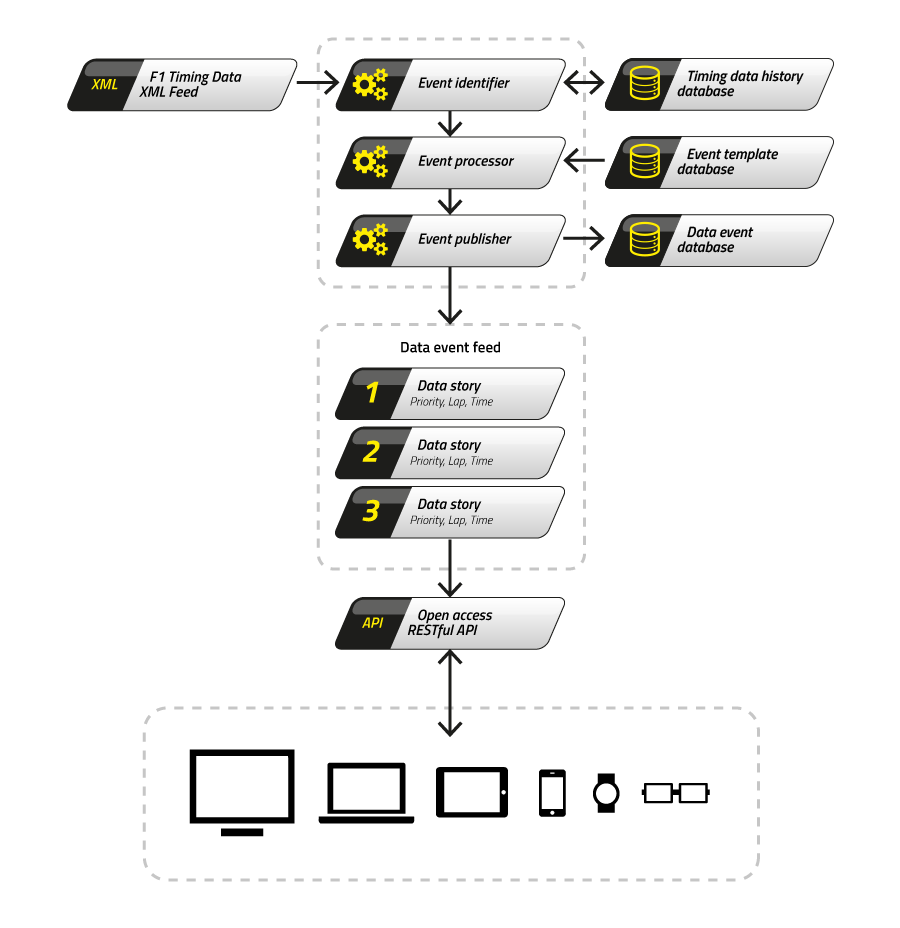 There are two main aims of this solution, to automatically turn the rich data from F1 timing into a consumable format for human beings and to give open access for other services to use the data in different and exciting ways (as explained in ‘The solution applied’). From these two foundations many benefits are achieved including:

The solution in action

The output of this proposal is an accessible text feed available through an open API. This creates multiple and endless opportunities for innovative services such as:

Plus many more ideas across many devices.

As demonstrated above this proposal truly delivers a new and innovative format for enjoying the experience of F1, which sits well alongside existing formats and opens the door for many more ideas in the future.

How do we measure happiness?

A story of lean product development